A plan has been selected for Dune Allen-area property envisioned for public beach parking.

The action and postponement took place at the June 10 Walton County Board of County Commissioners (BCC) meeting at the South Walton Annex.

Under discussion for approximately two months or more, and the topic of two public workshops, were two parcels available for purchase by the Walton County Tourist Development Council/Walton County for beach parking in the Dune Allen area. Acquiring this property would involve abandonment of an easement, which would require a long process.

The property, two adjacent parcels totaling 0.526 acre, is located on the north side of CR-30A, across the highway from the new regional beach access under construction in Dune Allen. The parcels are located west of Woodward Drive and east of Hilltop Drive. They are the property of Stinky’s Fish Camp restaurant owner Jim Richard and lie adjacent to the restaurant property and to the west.

Richard had offered the parcels to the county on the condition of the portion of the Woodward Drive easement to the west of the restaurant being abandoned.

At the June 10 meeting, District 1 Commissioner Bill Chapman commented that, of the four plan options under consideration, he preferred Option E, which would maintain the direct connection with CR-30A for Woodward Drive and allow abandonment of most of the existing Woodward Drive easement as Richard had desired. Option E provided for a small triangular sliver of the existing easement to remain unabandoned. 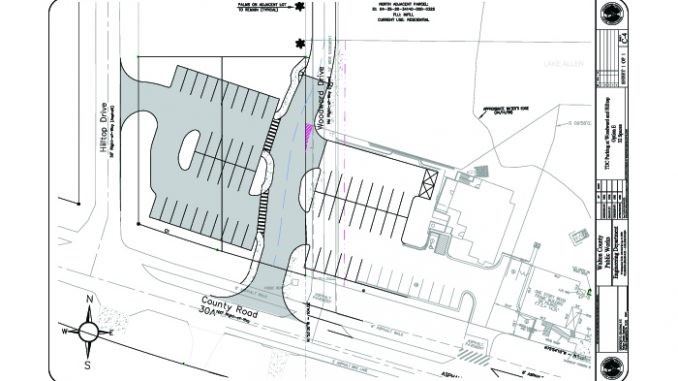 Chapman observed that the commissioners had received many emails and phone calls on the issue of the parking lot. He also suggested parking lot meters for the parking spaces that would require tourists to pay for parking but would allow free parking for locals.

Jim Richard spoke on his reason for putting forth the condition of the abandonment in connection with potential purchase of his property by the TDC/county. He noted that his restaurant had been operating for 17 years and that within the past five years there had been “countless complaints” both to the BCC and Walton County Code Enforcement due to the “clash between the commercial” and the residential uses in the neighborhood. He also anticipated more traffic in the neighborhood with the impending opening of the new regional beach access.

Richard said he believed that the original proposal (the one that would have closed off the direct connection between Woodward Drive and CR-30A) had been “brilliant.” He praised the plan for what it would do to separate commercial and residential uses in the neighborhood “in a safe manner.”

“It separates use and allows us to exist,” he said of the original plan.

While he saw some problems with Option E, Richard said he would be willing to negotiate as long as plans were for the property to be used for parking.

Glidewell motioned to “narrow the scope” to Option E. His motion was seconded, and the BCC took public comment from citizens in attendance on the issue.

Hilltop Drive resident Celeste Cobena was in agreement that Option E was the “most palatable,” with the exception of an exit on to Hilltop that was shown on the plan. She deemed this “not acceptable” due to impact on the quiet neighborhood.

Cobena also objected to the development of the portions of the lots that are within the Coastal Dune Lake Protection Zone that would take place with creation of parking on the lots by the county. She urged the county to instead lead the way in dune lake protection.

Cobena also suggested that a better option than acquiring the two parcels would be to look at beachfront parcels that are available for sale in the same area.

Jacqueline Fudge spoke about a blind curve on CR-30A in the area school bus stops in the area. She suggested spending money on a traffic study rather than spending the $2+ million to buy the two parcels.

Overall, Option E did not receive strong support from citizens in attendance, although Woodward Drive resident Bridget Morrison called the plan, “a fairly good compromise.” She and other residents highlighted traffic and safety problems in the neighborhood and the need for the BCC to address those. Other residents did not see the need for a parking lot at all in their neighborhood.

Two attorneys representing the homeowners’ association and individual homeowners in the Serenity at Dune Allen development, located to the north on Woodward Drive, spoke in support of Option E as the best solution.

Representing the South Walton Community Council (SWCC), Fred Tricker thanked Chapman for his statement that he did not foresee any agreement on the property without keeping a direct connection in place between Woodward Drive and CR-30A. Tricker also questioned the need for the exit onto Hilltop Drive.

Like Cobena, Tricker saw the county/TDC looking at beachfront property for purchase as more beneficial.

Jim Bagby commented that Richard had “tried to do the right thing.” He agreed with Cobena that the county should be “setting the example” for the dune lake protection zone. He was of the opinion that metered parking would not work due to the amount of monitoring required. Bagby’s final suggestion was to put in a parking lot for use of bicycles and golf carts only, with any other vehicles parking there to be towed.

After a call for the question, a motion was approved providing for negotiation with Richard in favor of Option E, along with a rewriting of the purchase contract for the property so that the county could retain the small triangular piece of the existing Woodward Drive easement in order to make the plan work.

Plans are for the reworked contract to be brought before the BCC at the next regular meeting in south Walton County.

South Walton Community Council is a 501(c)3 nonprofit organization; registration number with the Florida Department of Agriculture Division of Consumer Services is #CH10931.

A COPY OF THE OFFICIAL REGISTRATION AND FINANCIAL INFORMATION MAY BE OBTAINED FROM THE DIVISION OF CONSUMER SERVICES BY CALLING TOLL-FREE (800-435-7352) WITHIN THE STATE. REGISTRATION DOES NOT IMPLY ENDORSEMENT, APPROVAL, OR RECOMMENDATION BY THE STATE.